Elijhaa Penny has not only set personal records at the high school level, but he’s set records throughout his college football career. Coming out of Norwalk (Calif.) High School (NHS), Penny looked to make some noise playing college ball. Prior to his sophomore year at Cerritos College, he played one year at College of the Sequoias (2011) where he played in eight games and totaled 102 yards and two touchdowns on 22 carries. The beginning of next season, Penny found a new home. Cerritos College was a new start, and with that opportunity he took advantage of it and then followed with the completion of his junior and senior season playing Division I football for the Idaho Vandals.

Penny, a college graduate from the University of Idaho, understands the importance of giving back to youth. He hosted his first annual elite skills football camp, March 26, along with teammates, coaches, and brothers to coach up young athletes on skills such as explosiveness, leadership, flexibility, speed, and agility. Growing up with brothers who all played football, one would guess there would be some major competition in the mix. In actuality, it’s a bit different. Penny has two brothers who attended and played for NHS and one younger brother who is currently enrolled and playing for. Even though it’s natural for them to compete against each other, they are constantly backing one another up with constant support and advice of what one may see or do in certain game situations. Robert and Rashaad Penny supported Elijhaa at his first camp by bringing their support and knowledge to provide for the young athletes. Brione Penny, the youngest of the four and currently a sophomore at NHS, participated along with others during the camp.

Chino High School varsity football coach, Jesse Cisneros, who was Penny’s head coach at NHS as well as Miguel Rivera’s coach during his senior year, opened arms to Penny when the idea of hosting his first football camp came to mind.

A graduate of NHS, Penny was a three-year letterman after playing at defensive end and linebacker as well as running back. He was honored throughout his high school career as an all-area selection as a junior and senior, and an all-state medium school division choice as a senior. He was the Suburban League MVP twice and an all-CIF selection. He was the Wave Newspaper East Region Player of the Year after gaining 2,005 yards and scoring 18 touchdowns as a senior. Defensively during his senior season, he had 29 tackles and 1.5 sacks. As a junior, he rushed for 1,569 yards and 22 touchdowns, while totaling 62 tackles, eight sacks and four interceptions.

Penny was a standout running back at Cerritos College where he gained 1,338 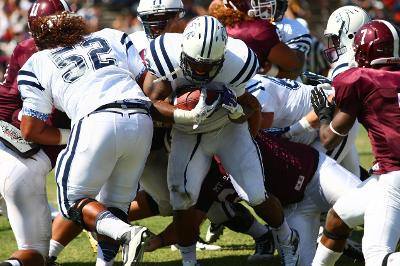 yards on 199 carries as a sophomore. He averaged 6.7 yards per carry and scored a Cerritos single-season record 20 touchdowns, with a career-high four vs. Ventura. He also caught 16 passes for 94 yards to total 1,432 all-purpose yards for 7-4 Cerritos. He had seven games of 100 or more yards and a career high of 262 on 34 carries vs. Palomar. Those efforts led to his being honored as a first-team All-American, a first-team All-California Region IV as well as the Northern Conference Offensive Player of the Year and a spot on the Idaho Vandals football team to begin his junior season playing Division I football.

leading rusher Penny gained 590 yards on 138 carries and scored 12 touchdowns his first season at Idaho. He also caught 12 passes for 107 yards and had eight kickoff returns for 143 yards to total 839 all-purpose yards. Going into his final year, he wanted to improve on a few things in the off-season. With focus on weight loss, intense workouts, and touching up on fundamentals that he wanted to improve on from last season, he knew his senior year would be his year. At the conclusion of his last season as a Vandal, Penny finished off with 1,174 rushing yards along with ten touchdowns.

He now looks forward to the beginning of a new chapter. Penny enters the 2016 NFL Draft as a Back who represents his family, city, and a prime example of the endless possibilities of what can happen when one focuses on turning their dreams into reality.

Board of Education Recognizes DBP